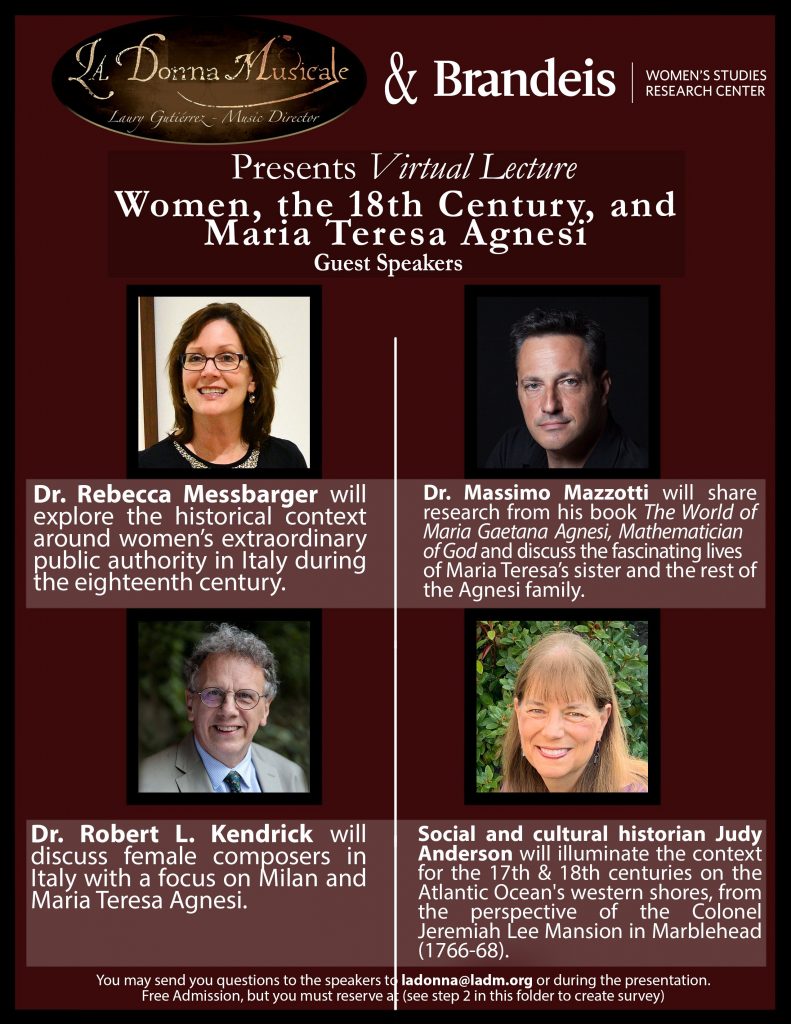 Dr. Rebecca Messbarger will explore the historical context around women’s extraordinary public authority in Italy during the 18th century.

Dr. Messbarger’s award-winning research centers on the Italian Enlightenment, particularly the intersections among anatomy, art, and women’s shifting roles in civic and academic life. Dr. Messbarger is Professor of Italian and Affiliate Professor of History, Art History, International and Area Studies, Performing Arts, and Women, Gender and Sexuality Studies at Washington University. She is also the University’s Director of Undergraduate Studies in Italian, and co-founder and first Director of the Medical Humanities Program. Her monograph The Lady Anatomist: The Life and Work of Anna Morandi Manzolini inspired a 2018 German film directed by Iris Fegerl.

Dr. Robert L. Kendrick will discuss women composers in Italy with a focus on Milan and Maria Teresa Agnesi.

Dr. Kendrick is one of the world’s most respected scholars of historical women composers and early Italian music. He works largely in early modern music and culture, with additional interests in Latin American music, historical anthropology, traditional Mediterranean polyphony, music and commemoration, and the visual arts.

Dr. Kendrick is William Colvin Professor in Music, Romance Languages and Literatures, and the College at the University of Chicago, as well as a member of the American Academy of Arts and Sciences. His books include The Sound of Milan, 1580-1650 and Celestial Sirens. Dr. Kendrick has also edited the motets of Chiara Margarita Cozzolani.

Dr. Massimo Mazzotti will share research from his book The World of Maria Gaetana Agnesi, Mathematician of God, and discuss the fascinating lives of Maria Teresa’s sister and the rest of the Agnesi family.

Dr. Mazzotti’s research focuses on the early modern and Enlightenment periods, with a particular interest in the topics of mathematics and other sciences. He has used his studies of cultural trends in mid-eighteenth-century Europe to demonstrate the ways in which Catholics of that era reconciled modern science with traditional theology.

Dr. Mazzotti teaches history and the sociology of science at the University of California, Berkeley, where he is also director of the Center for Science, Technology, Medicine & Society. In addition to his extensive publications, Dr. Mazzotti is also a frequent guest on documentary programs for the BBC, PBS, and Radio France.

Social and cultural historian Judy Anderson will illustrate the history of the U.S. Atlantic coast in the 18th and 19th centuries from the perspective of the Colonel Jeremiah Lee Mansion in Marblehead, MA (built 1766-8), one of the most opulent 18th-century Rococo houses in North America. During that period Marblehead was an active seaport, and the tenth most populous city in Britain’s North American colonies. The house has remained virtually intact since its original construction.

Judy Anderson was the Lee Mansion Curator for over a decade, after working with museums in Los Angeles and Boston. She has given illustrated talks about the Atlantic Seaboard for more than three decades, including at the Victoria and Albert Museum in London. She currently operates Marblehead Architecture Heritage & Tours.

You may send your questions for the speakers to ladonna@ladm.org, or ask them during the presentation.

Free admission, but you must register here https://bit.ly/366sGBi

For more information please visit www.ladm.org or contact us at ladonna@ladm.org and 617.461.6973

This lecture is sponsored by an Early Music America mini-grant